On Saturday Jay, Bart and I headed to my friend Julie’s house to help feed her animals. (AJ was spending the weekend with Grandma and Granddad.) Julie has a small flock of sheep, a dozen or so goats and I think I counted seven alpacas.

We started with Bart helping mix the feed for the goats and a some of the alpacas. They obviously knew what was happening as a couple of them were up on hind legs peering over the fence to watch. 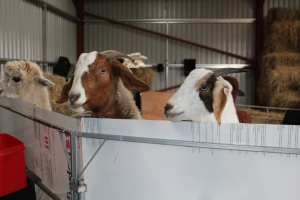 We then headed out into one of the pens to put the feed into the troughs.

Even though some of the animals

were bigger than her, Bart was right in amongst them dishing out the food.

After the goats it was the turn of the male sheep and a couple more of the alpacas before we headed out into the fields to feed the female sheep. 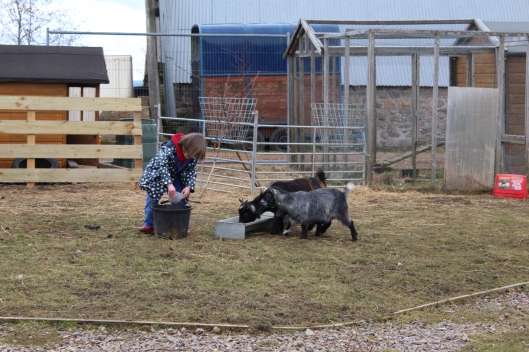 ed the animals, Jay and Bart went to the trough to fill it up. I have never seen anything so funny as when the sheep and alpacas realised they had been tricked. They turned around and charged for the food, so it was a race against time to get the feed out before being trampled!

Thankfully no one was squashed and Jay with a little help got the food out before heading back out of the field.

When all the dry feed was dished out the next job was filling the hay racks. Julie had already loaded the trailer with bales, so she and Jay hooked it to the quad bike and with Bart sitting on the front off they rode back out to the fields.

Bart and Julie then hand fed a couple of the wooly girls who had not raced to the trough with everyone else. 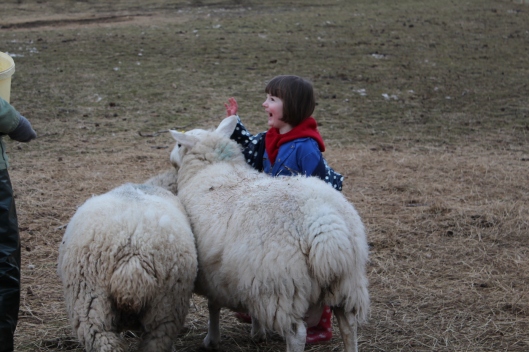 Finally with a  bone shaking trailer ride for all of us back to the barn, our job was done.

We had a great time. Hopefully we will be able to go back for another visit as I know AJ will be very disappointed she missed out.

A big, big thank you to Julie who allowed us to help and her patience with a very over excited little girl!

AJ and I were driving up the track to the house and she was admiring the fleece wearing beasties in the field.

AJ: Mum, I like the black ones best, they have cute faces and nice eyes. Not nice like people eyes, but like sheep eyes. Because they are sheep aren’t they. 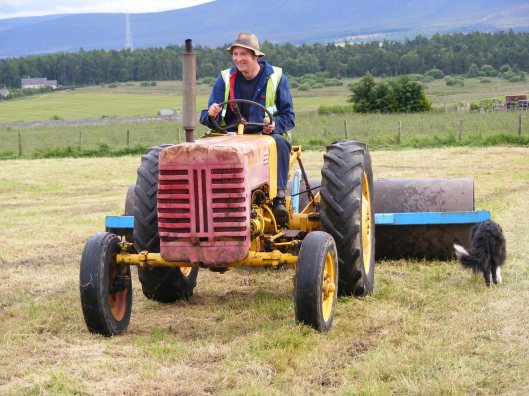 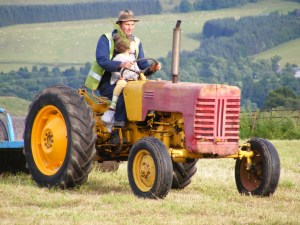 My husband is like a pig in mud at the moment. A friend of ours who owns some of the surrounding land asked Jay if he would like to test drive his tractor in one of the fields.  His job is to tow a huge water filled rolling weight to flatten the ground.

Jay jumped at the chance.

Then of course the girls wanted to join in too.

If you’ve read my bio and posts you will get the gist of how much this family loves animals. (I think spending £130 vet bill on an £8 hamster kind of sums it up.) Jay’s dream job is to have his own pig farm and I am just a sucker for anything with paws and fur. I am not keen on scales, (either the reptilian or fish kind) and feathers inside the house are not my thing, but I am not someone who will scream and jump on the furniture if the cat brings a mouse inside. (Although I won’t try to make a pet of it either.)

A number of years ago my sister visited with her two children, they were scared of our dog and they would flinch if one of the cats came near them, it drove me crazy. I was determined this would not be the case with our girls.

Willow, our twelve-year-old Border Collie, is very patient with them and quite happy to play and be hugged. Sparky, our stray cat who moved in last December, adores AJ and sleeps on her bed at night. He has the patience of a saint and doesn’t scratch, even when the girls are playing vets and they try to stuff him in a pet carrier already containing a blanket and a fluffy pillow (all for his comfort of course). Although the girls do not handle the hamsters (too small and wriggly) they love to stroke them and feed them tidbits. The two rabbits, Nibbles and Tallulah, join in their games and are happy for the girls to pet them. Murphy and Patch the guinea pigs and newest additions to our family are still shy and skittish, but the girls help with cleaning them out and love to smooth their soft hair when I pick them up.

This week both Jay and I have had the week off work, so for one of our trips we took the girls to a children’s farm. When we paid our entrance fee we also bought some bags of animal feed to take in with us. 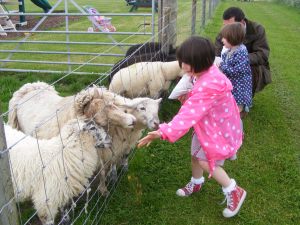 The four of us had a great time. There were pygmy goats, sheep, chickens and ducks. Rabbits, donkeys, alpaca’s and a grumpy looking pig called Bertie. All the animals came to the fences as we approached eager for some food and the girls were really good at holding out their hands for the feed to be taken. 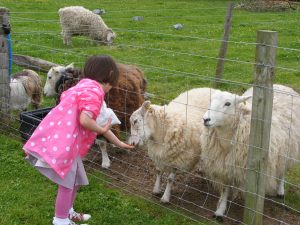 The place was clean and all the animals looked loved and well cared for. There was also a play and picnic area which was a big hit too.

I think it is good for children to get up close to all sorts of animals, to touch and feed them. Mind you, when Bart asked if she could have a pet elephant I had to say no. 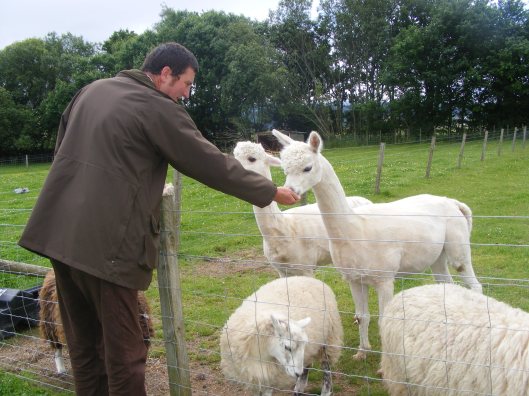 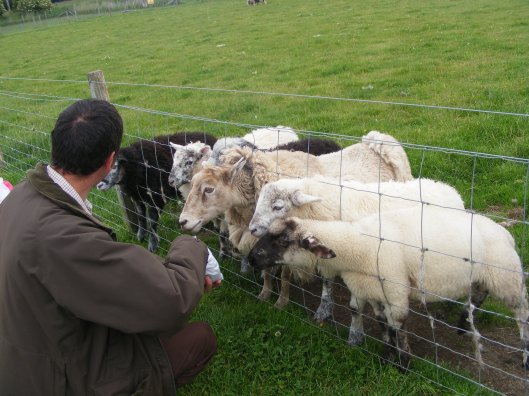